Skip to content
Visitors are no longer required to wear masks at RBG. Learn more about visiting safely during COVID-19.

Flowering cherry trees grace RBG’s gardens with typically white or pink flowered blooms and have an ephemeral grace and beauty shared by no other type of plant. These trees which at peak bloom look like clouds of pink and white are one the most welcome signs that spring has finally sprung!

At RBG, our flowering cherries are part of our early spring celebrations. Globally, flowering cherry trees have a long history especially in Japan where the cherry blossoms are celebrated each year. Every year flowering times are recorded and noted and this has occurred for around the past 1300 years. RBG also annually records the flowering times of its Cherries as part of a biological science known as phenology which is an important tool in helping to track climate change.

In 2010, we added 34 trees to this collection donated to RBG as part of the Sakura Project. These trees are planted at both the Arboretum and Rock Garden sites and are a must see in early spring.

Bloom Watch
Where to Find Them
Virtual Tours
About Flowering Cherry

Pre-Registration is required for visitors (including RBG Members) parking at the Arboretum May 5 to June 1.

Parking is FREE for RBG Members displaying a member parking pass, though registration is still required. 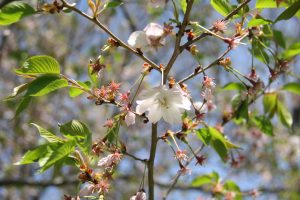 The Flowering Cherry collection has finished blooming for the season.

Historic Bloom Dates at the Arboretum

Note: bloom dates can vary drastically from year to year. Check back for our “bloom watch” updates.

Where to Find Flowering Cherry Trees at RBG

Royal Botanical Gardens is made up of four distinct formal gardens contained within 1,100 hectares of nature reserve, across the municipalities of Hamilton and Burlington Ontario.

The largest collection of flowering cherry trees can be found at the Arboretum, with individual trees also found at Rock Garden and Laking Garden. See all our garden areas and start planning your visit at rbg.ca/gardensandtrails

The largest collection of flowering cherry at RBG can be found just south of the Lilac Dell in the Arboretum.

Find these visitor favourites outside of the Rock Garden Visitor Centre, and a few individuals south of the parking lot.

Blooms are ever-changing in RBG’s five cultivated garden areas and nature sanctuaries. Check back to learn what’s blooming now or see the blooms calendar for a rough estimation of what to expect in a particular season.

Flowering cherries are deciduous trees with showy, ornamental flowers in spring, oval serrated leaves, with many species or cultivars having good fall colour. Some cultivars are also appreciated for having highly ornamental bark. When planting cherries select a location with full sun and that is open and airy.

Cherries can be prone to wind damage and frost cracking in severe winters so a sheltered site is also advisable. A south or southwest facing situation is ideal. Cherries should be planted in fertile, well-drained soil, rich in organic matter. Many garden cultivars are adaptable to a wide range of soils but avoid planting on heavy clay soils. Pruning techniques should only ever be employed to remove dead, diseased, rubbing or crossing wood. In general cherries are fast growing and in tree terms fairly short lived. Some cultivars may not live beyond 50 years in age

One of the most iconic spring sights at RBG is the flowering cherry circle in the Arboretum. The trees planted in this circle are Prunus ‘Accolade’ and were accessioned in 1966. P. ‘Accolade’ is a spectacular pink semi-double flowered cultivar that has achieved the Royal Horticultural Society (RHS) Award of Garden Merit (AGM). These trees look most spectacular when viewed against the backdrop of a pure blue sky as the blue provides a stunning contrast to the pink flowers. In some years the additional presence of the moon during the daytime adds extra drama to this spectacular scene. Once the flowers begin to fade and fall the surrounding grassy area looks like it is covered in pink confetti. Prunus ‘Accolade’ is also a bee magnet so a great choice to include in a wild life garden

Perhaps the most unusual flowering cherry in the RBG collection is located in the grassy knoll at the back of the Rock Garden Parking lot. Prunus ‘Asagi’ is a very rare tree both in Japan and in the West. Asagi translates as “shallow yellow” in relation to the flower colour and it is precisely this trait that makes this cultivar so curious. Most flowering cherries are white or pink whereas this plant has pale greenish yellow flowers which is what makes this cultivar so unusual. Conservation of rare plants such as this is one of the many critical roles undertaken globally by botanical gardens. Saving and securing botanical diversity for the future benefit of all species including our own is critical for the health of our planet.

The colour of cherry flower petals can vary considerably with the colour of the same flower changing from first emergence through maturity to blossom fall. Typically flowers are darker in bud becoming paler as they age and expand. Seasonal conditions, climate and soil type can also all have an influence on the annual colour of flowers. Cherry flowers are divided into four different groups which are based upon the number of petals. Whilst nature isn’t always perfect and variations occur as a rule;

The Japanese flowering cherries within RBG’s collection are some of most treasured and appreciated of these trees. These cultivars have been bred for centuries in Japan and play a hugely important role in Japanese society and culture. During cherry blossom time huge festivals are held as Japanese people hold parties and celebrations. The Japanese name the flowering cherry sakura and the art and celebration of viewing sakura is known as hanami (flower viewing) during day time and yozakura (night sakura) at night time. The short lived flowers are particularly important in Japanese culture as a symbol of the ephemeral and impermanent nature of life. The period of blossom fall is particularly important to Zen shrines around Japan where time is devoted to considering the beauty and still quiet of the falling petals. Cherry trees are often planted outside public buildings and schools and as flowering time occurs in April sakura are often associated with start of the financial and school year. By displaying plants from around the world botanical gardens play a rich role in celebrating the different cultural diversity of people from around the world. Look for the RHS AGM cultivars ‘Shirofugen’ ‘Kojo-no-mai’ ‘Ichyo’ ‘Kanzan’ and ‘Miyako’ and have a very happy hanami!

The care and growth of our horticultural collections are possible thanks to the generous support of RBG Members and donors. With a donation to Growing up Green, you can ensure an active, vibrant and healthy future for the children of today and tomorrow through our horticultural and conservation projects.

Royal Botanical Gardens (RBG) is the largest botanical garden in Canada, a National Historic Site, and registered charitable organization with a mandate to bring together people, plants and nature.

Plants of interest are ever-changing in RBG’s five cultivated garden areas and nature sanctuaries. Check back to learn what’s blooming now or see the blooms calendar for a rough estimation of what to expect each season.

Discover what’s happening in the gardens! Some programs, events, and experiences listed below are included in general admission / membership, while others require separate registration.