The Dan Lawrie International Sculpture Collection was founded by philanthropist Dan Lawrie at the Royal Botanical Gardens in 2014. Through Mr. Lawrie’s generous support, there are more than a dozen sculptural works in RBG’s Hendrie Gardens.

The large-scale permanent work, School of Fish by Inuit sculptor Kakkee Negeoseak, was installed in the Reflecting Pool in August 2019.

The focus of this project was to find a work that had a symbolic connection to the water, as well as an aesthetic match to the dignity of the space at the centre of the RBG rose garden. With a desire to acknowledge 2019 as the UNECSO Year of Indigenous Languages, this quickly led to a connection with Inuit stone carving.

The majority of Inuit stone carving is done in serpentinite stone at a small, hand-held scale with much of the subject matter featuring animals such as bears, birds, fish, owls, narwhal and other species native to their communities. Many of the carvers do not speak English, and are represented by trusted galleries or institutions such as Dorset Fine Arts in Toronto (an Inuit Art specialist since 1978) and co-ops like the West Baffin Eskimo Co-operative in Cape Dorset, Nunavut known for its unique focus on the arts and artists of the community.

Working with the staff at Dorset Fine Arts, the team selected a stone carving of four fish by Dorset artist Kakkee Negeoseak. With a desire to transpose the work from its original 12-inch scale, to a large-scale public work, the team worked with the 3D lab at The Printing House to create a digital 3D scan of the original. This scan would then be used to print a detailed, 70-inch replica to be used in the bronze casting process.

Kakkee Negeoseak was born April 7, 1973 in Iqaluit but moved to Cape Dorset in 1993. He began carving at the age of 16 and although he is self-taught, he also learned by watching other carvers. His father, Ningeosiak Peter, and his mother, Parnee Peter are both sculptors in Cape Dorset. Kakkee’s grandfather, the late Jamasie Teevee was a well-known graphic artists. He has exhibited in Canada, the United States and Germany. 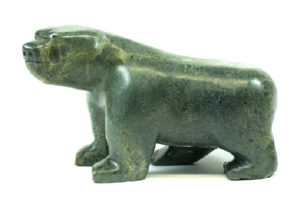 The Indigenous peoples of the far north have been making artworks out of bone, stone and ivory for thousands of years. The earliest carvings were decorated objects and tools, often embellished with figurative imagery. Later, Inuit began trading small carvings of animals and other representational pieces with European explorers and whalers. The Canadian Handicrafts Guild took an early interest in Eskimo carving, purchasing work through the Hudson’s Bay Company throughout the 1920s and 30s. But it was not until the post-war travels of James Houston that an organized, commercial enterprise could be considered. With the Guild’s sponsorship, Houston purchased pieces from several communities along the east coast of Hudson Bay for an exhibition at the Guild’s Montreal gallery in 1949. The public response was overwhelming, marking the beginning of contemporary Inuit art as an organized, commercial venture, and a means for Canada’s northern peoples to celebrate and share their culture.

Cape Dorset artists rarely use the term sculpture to describe their work. They prefer the term carving because it better reflects the dexterity developed through centuries of making things by hand. When carving, there is a direct bond between the medium, the environment and the history of Inuit culture. 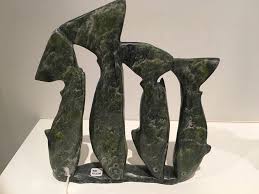 Today, artists in Cape Dorset work primarily with a stone called serpentinite, a metamorphic rock well suited for carving the naturalistic forms and extravagant compositions associated with the Cape Dorset style. The colour of the stone ranges from a pale, putty green to bluish green-grey, to almost black. It is quarried at Korak Inlet and Markham Bay, about 200 miles down the coast from Cape Dorset and as much as 40 tons a year is transported back to the community by boat or snowmobile. There is also a rich vein of marble running like a highway along the coast near Cape Dorset, and several artists have made monumental works in this ancient medium.

Most carvers work outdoors or in carving shacks next to their houses, so you can usually spot a carver’s home by the greenish, grey dust in the front yard. Many use an upturned cable spool as a work bench for larger carvings and a slab of cardboard or plywood on the ground to work on smaller pieces.

In the past carvings were made by hand and the artist would chip away at the stone with a hatchet or small axe. Today most artists rough out the shape with electric grinders and dremels. Rasps and files are used to further define the subject and to add details, followed by an awl or a nail to incise fine lines. The carving is finished by smoothing the surface with sandpaper and, finally, a little wax or oil to buff it to a nice shine.

Established in 1959, West Baffin Eskimo Cooperative has enjoyed an international reputation for the exquisite prints, drawings and carvings created by its Inuit artist members. In addition to operation of the Kinngait Studios in Cape Dorset, the cooperative maintains a Toronto office, Dorset Fine Arts, which is responsible for interfacing with galleries, museums, cultural professionals, Inuit art enthusiasts and the art market globally. The role of West Baffin Eskimo Cooperative has significantly expanded to include communications, promotion, advocacy, government relations and special projects as related to the Inuit art of Cape Dorset. The cooperative is equally engaged with the business of art sales as it is with functioning as a resource centre and archive while at the same time developing meaningful and ongoing relationships with a variety of organizations across Canada, the United States and Europe.

RBG friend and donor Dan Lawrie has made a commitment through 2023 to donate inspiring sculpture to Royal Botanical Gardens, creating the International Sculpture Collection. Through Dan’s generosity, this permanent collection grows in Hendrie Park each year, with the addition of new works from around the world.